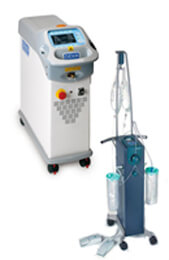 This advanced technique is based on lasering the fat tissue using Smartlipo laser energy, followed by skin tightening (taking advantage of the thermal effect of the laser energy). The suction machine or the bodyjet liposuction technique is then used to suck out the liquefied fat.

Dr Ayham Al-Ayoubi took the Smartlipo treatment further and developed his own technique for patients with much larger areas of fat. This combines Smartlipo and gentle suction at the same time – The Laser Assisted Liposuction (LAL).

Smartlipo‘s pulsating laser beam has a photo-mechanical effect rupturing the fat cells’ membrane. Combined with this, it has a thermal effect which melts the fractured fat cells and coagulates small blood vessels which reduce the bleeding to minimum. Both effects together (Photo-dynamic and Thermal) will give the skin tightening results.

The areas to be treated are marked with a special pencil and each is divided into segments of 5 x 5 cm. A small incision 1 – 2 mm is made with a micro-scalpel in which the local anaesthetic is injected. The local anaesthesia is carried out via longitudinal infiltration of the subcutaneous fatty tissue in anything from ten to twenty directions in order to form a network.

The deep fat is lasered first, followed by the superficial fat, and finally the fat is suctioned out. This produces positive results and is relatively painless. Dr Ayham Al-Ayoubi always reminds his patients that it is not possible to have any procedure without some discomfort, but this is a very positive and safe procedure.

The skin tightening in some areas such as hips is immediate. Patients often like to see results straightaway, they don’t like to be told that it can take many months to see results. It is performed under local anaesthetic, eliminating the need for a general anaesthetic and an overnight stay, which also means that it can be performed on patients who aren’t suitable for general anaesthetics. There are no stitches, just a very small incision that heals very well and quickly. Within three or so months, the patient can generally see the final result. 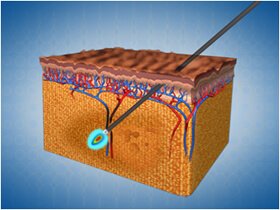 In 2008, Dr Ayham Al-Ayoubi introduced the evolution of laser treatments into the UK from the USA, the second generation Smartlipo MPX. He started to use this evolutionary laser in his laser assisted liposuction technique. This allows him to perform Smartlipo with suction in multiple areas, producing a skin tightening effect.

The Smartlipo MPX uses two different laser wavelengths, both targeting the fat cell membranes, blood vessels and water which give the skin a tightening effect, in addition to fracturing the fat cells.

In 2010, the third generation of Smartlipo, known as Smartlipo Triplex, was introduced into the UK and Europe by Dr Ayham Al-Ayoubi. This machine uses three different wavelengths of laser energy and has taken the laser assisted liposuction technique to a different level. It allows the plastic surgeon to perform Smartlipo with suction on multiple and large areas giving a skin tightening effect with no surgical scars and with no down time.

The laser assisted liposuction technique has been adopted by numerous plastic surgeons and cosmetic doctors worldwide.

In addition, Dr Ayham Al-Ayoubi has been travelling worldwide, teaching this revolutionary advanced laser liposuction technique. He performs this procedure at his Clinic in central London, which is the UK’s official training centre for Smartlipo laser liposuction.